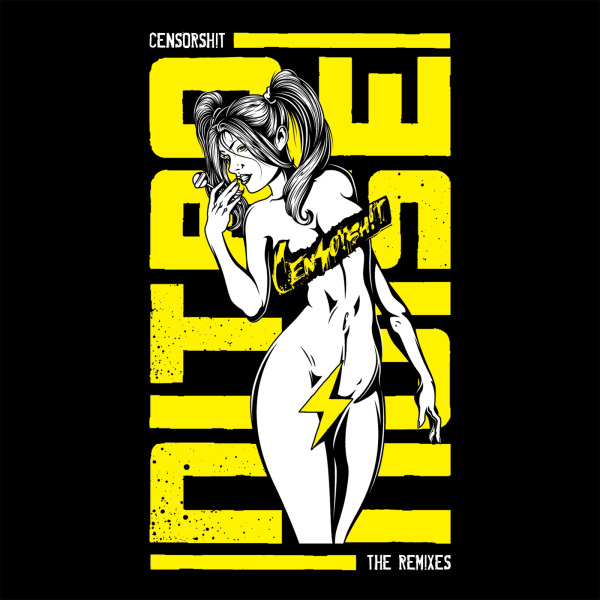 NITRO/NOISE’s second album “No Cure For Apocalypse” came out last year in conjunction with the Canadian band’s first EU tour, firmly establishing them as a formidable new force in the industrial genre.

Heavy-duty and hard-as-nails in every respect, “No Cure For Apocalypse” steadily sold out of its 2CD first edition over the course of 2015 – and with the band now poised to take to the stage at the prestigious Aftermath Festival in Toronto this Friday alongside TACTICAL SEKT and VELVET ACID CHRIST the time has finally come for us to proudly present the spawn of that album..!

Many months ago we placed the anthemic standout track “Censorsh!t” in the hands of numerous producers and have now pressed the results onto 175gm heavyweight vinyl – four tracks per side. No mere “single”, this 12” is rather “Censorsh!t – The Remixes” – a companion piece to both the original track and album, comprised of sometimes radical reinventions of the original.

Krischan Wesenberg’s “ROTERSAND Rework”, which first appeared on the CD2, is remastered here for vinyl – alongside the dramatically different “ROTERSAND Redub” version which was subsequently released on the special DWA compilation available with Orkus! Magazin’s summer edition last year.

Bass metal sensation ZARDONIC – eagerly awaited at Resistanz Festival in 2016 – provided the speaker-smashing opening track, plus an instrumental version for DJs pressed on the B-side of the record.

Scene legends FADERHEAD and DOPE STARS INC. supplied mixes in their own inimitable signature styles – with rising star SERAPHIM SYSTEM and darlings of the witch house crowd AAIMON providing the more downtempo grooves for the respective runouts of each side.

Like all of DWA’s vinyl releases, rather than being put on vinyl as some kind of afterthought “Censorsh!t” was carefully conceived and formatted from the outset specifically for the 12” medium – an album-length single for DJs, collectors and die-hard NITRO/NOISE fans alike, specifically mastered for vinyl by Jan L at his X-Fusion Music Production facility in Germany.

Strictly limited to 100 units only, on heavyweight 175gm vinyl, “Censorsh!t” comes complete with hand-numbered black outer sleeve screen-printed in yellow and white, matching black poly-lined inner sleeves for maximum protection, plus of course a download code for all 8 tracks. Front cover artwork comes, like the “No Cure For Apocalypse” album itself, from Estonian artist Darius Alas.

But that’s not all!
Want to demonstrate your devotion to NITRO/NOISE in public?

We’ve teamed up with the band themselves to provide a package deal on the 12” plus this brand new t-shirt based on the front cover art, for all international customers!

Being sold in limited quantities by the band at Aftermath this weekend, DWA will be offering this same shirt ONLY with pre-orders of the “Censorsh!t” 12” at a special all-inclusive price! Can’t go to Aftermath? Unlucky for you…BUT you can instead go for the “Censorsh!rt Bundle” offer, and guarantee your shirt and size of choice – available ONLY until October 10th! Shirts will ship separately from your 12”, direct from Canada!

“Censorsh!t – The Remixes” and “The Censorsh!rt Bundle” are available from October 24th, and pre-orders are open NOW!
Get it HERE:
http://dwa-digital.com/album/censorsh-t-the-remixes