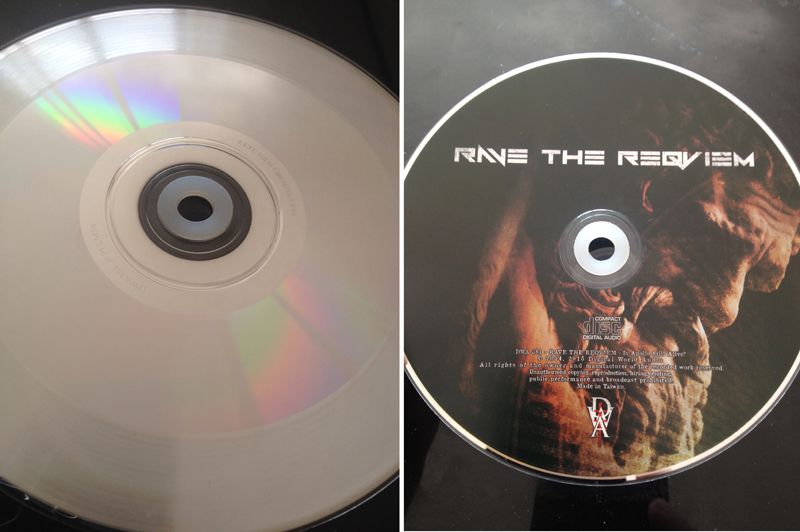 For the third and final single to be taken from Swedish industrial metal-step crossover act RAVE THE REQVIEM’s self-titled debut album, DWA has taken full advantage of both the song’s length and the length of the 3 remixes presented alongside it to squeeze both 4 tracks of CD-audio and – on the first 100 copies ONLY – to lathe-cut the title track for vinyl playback.

Yes – you read that correctly. The first 100 copies of the “Is Apollo Still Alive?” CD are in fact “a hybrid CD/vinyl” – a format so rare that it doesn’t even really have a name and is only produced by one company on the planet. In fact, we weren’t even sure whether to give it our standard CD catalogue numbering “DWA” or our usual vinyl standard “DWV” – but “DWA381” won out in the end, given that (a) it IS “a CD” not “vinyl” and (b) only the first 100 units are “vinyl-cut”.

The CD comes with a special plastic adaptor already inserted, in order to facilitate playback on a record deck. The vinyl track is lathe-cut around the outer-most part of the CD, with the regular CD-audio data occupying the remaining space inside, and is presented in full-colour card wallet with mythologically-themed artwork executed like the previous 2 singles and album by DWA’s lead designer Vlad McNeally.

Intended as both a final flourish for the current album and an advertisement for the “Remix The Reqviem” digital album unleashed last month, this is quite literally “an analogue-only release” embracing both CD and vinyl technology to create a truly unique artefact. No digital release will be made. The title track can of course be found digitally on the original album, and the IVARDENSPHERE and W.A.S.T.E. remixes on the “Remix The Reqviem” album. The fourth and final track however is exclusive to this CD release – VPROJEKT “Version 2”, which is a substantially alternate mix to that which can be found on “Remix The Reqviem”…

“Is Apollo Still Alive?” is released on October 9th, and can be pre-ordered now. Be fast if you want to be sure of picking up one of the lathe-cut CD-vinyl hybrid disc versions:
https://digitalworldaudio.bandcamp.com/merch/dwa381-rave-the-reqviem-is-apollo-still-alive-cd-vinyl-hybrid