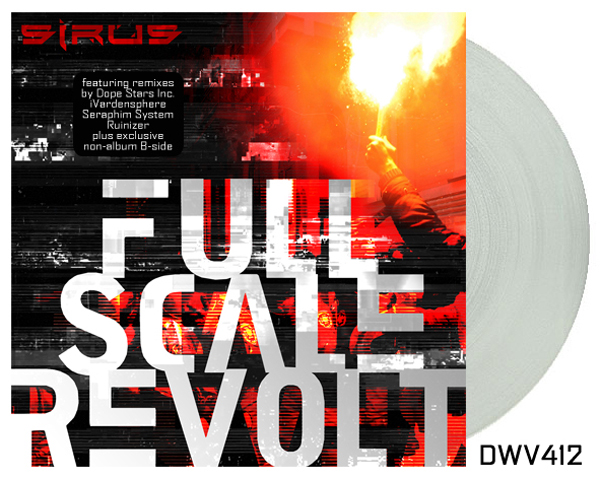 With a little less than a month to go until the worldwide release of their second full album for DWA “Satellite Empire”, it’s time for us to unleash the second single from that album – the ominously-titled “Full Scale Revolt”.

And there has been no economy of scale involved in putting this together either. “Full Scale Revolt” comes as a 6-track EP featuring remixes from DOPE STARS INC., IVARDENSPHERE and DWA labelmates RUINIZER and SERAPHIM SYSTEM, plus the exclusive B-side “H.E.V.”

And it literally is “a B-side” too – because in addition to the digital release timetabled for today (October 9th), we have had the entire EP re-mastered for vinyl by Kolja Trelle at Koltron Music Production and sent it off to be lathecut on heavyweight transparent 12” vinyl. This ultra-limited edition of x25 hand-cut hand-numbered units will come mid-November with full-colour labels and a wraparound poster to display the clear nature of the vinyl through an outer PVC sleeve.

For the insatiable collectors out there, this limited edition clear lathe-cut vinyl version is another must-have artefact from DWA’s burgeoning library of analogue curiosities..!